The 36 Questions from Thomas Nagel: His 2012 Book
“Mind and Cosmos: Why the Materialist Neo-Darwinian Conception of Nature is Almost Certainly False”

Dr. Thomas Nagel, Professor of Philosophy and the School of Law at New York University, is one of the most influential atheist philosophers in America. Winner of the 2008 Rolf Schock Prize in Logic and Philosophy, he is known for his expertise in the philosophy of the mind, political philosophy and ethics. He is also well known for his critique of material reductionism and especially Darwinian evolution, focusing on the failure of evolution to account for consciousness, cognition, reasoning and moral value judgments.

In this latest book from Dr. Nagel, he argues that we must look outside the physical sciences in an effort to understand humanity’s capacity for conscious reasoning and making value judgments. While he does not offer a solution for why human beings are able to function as conscious moral agents, at the end of the chapter on ‘Antireductionism and the Natural Order’, he makes this statement: “If life is not just a physical phenomenon, the origin and evolution of life and mind will not be explainable by physics and chemistry alone. An expanded, but still unified, form of explanation will be needed, and I suspect it will have to include TELEOLOGICAL elements.”

What he is recommending: the universe shows us there is purpose to our existence, and we need to start including that in our attempts to explain the origin of life and how humanity came to be distinct from other life forms.
Here are the 36 questions that Dr. Nagel asks proponents of evolution to answer, with the page number where it is found in his book, and organized into 7 topics. These questions are not new – but they are coming from one of the most respected analytical atheist philosophical minds today – and they are meant to be a challenge to atheists to really examine the evidence, because it will lead any open-minded seeker away from an evolutionary worldview. 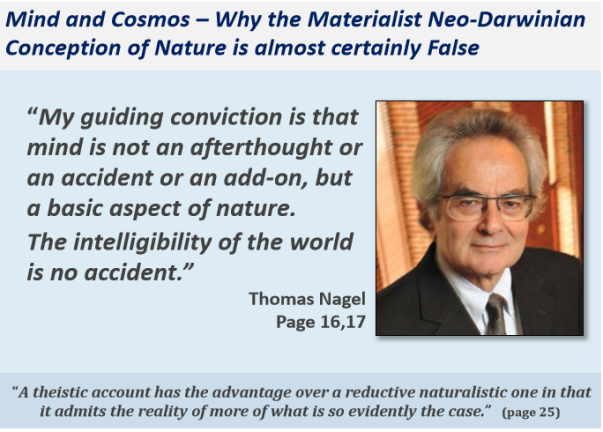 EXCERPTS FROM ‘MIND AND COSMOS’

On page 3 he says “A legitimate task of philosophy is to investigate the limits of contemporary scientific knowledge.” In this book, Prof. Nagel argues that materialistic Darwinism fails to answer the most basic questions of life came to be and how life came to diversify:

“For a long time I have found the materialist account of how we and our fellow organisms came to exist hard to believe, including the standard version of how the evolutionary process works. The more details we learn about the chemical basis of life and the intricacy of the genetic code, the more unbelievable the standard historical account becomes. It seems to me that, as it is usually presented, the current orthodoxy about the cosmic order is the product of governing assumptions that are unsupported, and that flies in the face of common sense.” (page 5).

He further takes evolutionary biology to task on its inability to even stand up to the common sense of anyone, regardless of whether they are trained in the biological sciences:

“It is prima facie highly implausible that life as we know it is the result of a sequence of physical accidents together with the mechanism of natural selection. My skepticism is not based on religious belief, or on a belief in any definite alternative. It is just a belief that the available scientific evidence, in spite of the consensus of scientific opinion, does not in this matter rationally require us to subordinate the incredulity of common sense.” (pages 6,7).

And then, on page 7, he explains why people find this position outrageous – because the scientific community continues to brow-beat anyone who raised the same doubts as he is in this book:

“I realize that such doubts will strike many people as outrageous, but that is because almost everyone in our secular culture has been browbeaten into regarding the reductive research program as sacrosanct, on the ground that anything else would not be science.”

On page 10, he explains why all points of view, including those of scientists who promote Intelligent Design, should be taken seriously:

“Even though writers like Michael Behe and Stephen Meyer are motivated at least in part by their religious beliefs, the EMPIRICAL ARGUMENTS they offer against the likelihood that the origin of life and its evolutionary history can be fully explained by physics and chemistry are of great interest in themselves. Another skeptic, David Berlinski, has brought out these problems vividly without reference to the design inference. Even if one is not drawn to the alternative of an explanation by the actions of a designer, the problems that they pose for the orthodox scientific consensus should be taken seriously. They do not deserve the scorn with which they are commonly met. It is manifestly unfair.”

On page 9 he further explains why current evolutionary theory is in serious need of repair – because of discoveries in science!:

“Doubts about the reductionist account of life go against the dominant scientific consensus, but that consensus faces problems of probability that I believe are not taken seriously enough, both with respect to the evolution of life forms through accidental mutation and natural selection and with respect to the formation from dead matter of physical systems capable of such evolution. The more we learn about the intricacy of the genetic code and its control of the chemical processes of life, the harder those problems seem.”

He goes deeper in his critique of evolution:

“With regard to evolution, the process of natural selection cannot account for the actual history without an adequate supply of viable mutations, and I believe it remains an open question whether this could have been provided in geological time merely as a result of chemical accident, without the operation of some other factors determining and restricting the forms of genetic variation. It is no longer legitimate simply to imagine a sequence of gradually evolving phenotypes, as if their appearance through mutations in the DNA were unproblematic – as Richard Dawkins does for the evolution of the eye.” (page 9).

Then he goes to the origin of life, explaining how our discovery of the DNA molecule eliminates materialistic naturalism as a sufficient explanation for life’s origins:

“With regard to the origin of life, the problem is much harder, since the option of natural selection as an explanation is not available. And the coming into existence of the genetic code – an arbitrary mapping of nucleotide sequences into amino acids, together with mechanisms that can read the code and carry out its instructions – seems particularly resistant to being revealed as probable given physical law alone.” (page 9).