Dr. Stephen C. Meyer is an American PhD Professor in the Philosophy of Science (obtained at the University of Cambridge). He is best known for Intelligent Design argument as seen in the complexity in biochemical systems.

His work in Intelligent Design is introduced in this quote from his website ‘stephencmeyer.org’: “The Origins of Information: Exploring and Explaining Biological Information the 21st century, the information age has finally come to biology. We now know that biology at its root is comprised of information rich systems, such as the complex digital code encoded in DNA. Groundbreaking discoveries of the past decade are revealing the information bearing properties of biological systems.

Philosopher of science Dr. Stephen C. Meyer is examining and explaining the amazing depth of digital technology found in each and every living cell, such as nested coding, digital processing, distributive retrieval and storage systems, and genomic operating systems. Meyer is developing a more fundamental argument for intelligent design that is based not on a single feature like the bacterial flagellum, but rather on a pervasive feature of all living systems. Alongside matter and energy, Dr. Meyer shows that there is a third fundamental entity in the universe needed for life: information.” 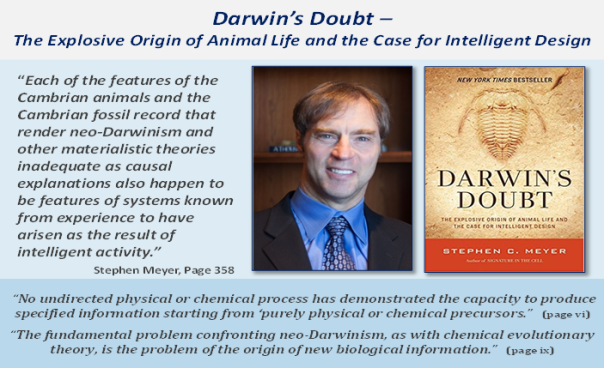 In the book’s prologue, Dr. Meyer explains his why his work on the Cambrian Fossil Explosion as evidence for Intelligent Design demands a hearing: “Scientists now know that building a living organism requires information, and building a fundamentally new form of life from a simpler form of life requires an immense amount of new information. Thus, wherever the fossil record testifies to the origin of a completely new form of animal life – a pulse of biological innovation – it also testifies to a significant increase in the information content of the biosphere.”

He then challenges the scientific community with the need to explain how information could possibly originate from an evolutionary process: “Whenever we find functional information – whether embedded in a radio signal, carved in a stone monument, etched on a magnetic disc, or produced by an origin-of-life scientist attempting to engineer a self-replicating – and we trace that information back to its ultimate source, invariably we come to a mind, not merely material process. For this reason, the discovery of digital information in even the simplest living cells indicates the prior activity of a designing intelligence at work in the origin of the first life.”

Throughout the 20 chapters of his book, Dr. Meyer provides the following information, with their page reference, to make it easy for anyone to follow along and learn.

CHAPTER 4: THE NOT MISSING FOSSILS?

CHAPTER 5: THE GENES TELL THE STORY?

CHAPTER 6: THE ANIMAL TREE OF LIFE

CHAPTER 10: THE ORIGIN OF GENES AND PROTEINS

CHAPTER 13: THE ORIGIN OF BODY PLANS

CHAPTER 15: THE POST-DARWINIAN WORLD AND SELF-ORGANIZATION

CHAPTER 17: THE POSSIBILITY OF INTELLIGENT DESIGN

CHAPTER 18: SIGNS OF DESIGN IN THE CAMBRIAN EXPLOSION

CHAPTER 19: THE RULES OF SCIENCE